What was your role as Director, Environmental Strategy for Agriculture at Monsanto about?

Why would a seed company need somebody to do this?

“Agriculture is the second largest source of emissions on the planet after power generation. Even though GHG-emitting agricultural practices are individually not that significant, they become so simply because agriculture occupies such a wide surface area of our land mass. For example, fertilizers aren’t applied in huge amounts, but they contain compounds such as nitrous oxide, which has 300 times the global-warming potential of carbon dioxide. And methane has 25 times the warming potential.

My team and I were trying to understand the problem and solutions. We worked with a variety of academic and public groups to understand the modelling behind GHG emissions. This included getting information from Gentec on feed efficiency and its potential to mitigate this problem.It was really interesting to discover where emissions come from and which ones we can do something about.”

What attracted you to the role?

“I’ve always been interested in sustainability and modelling (I’m a closet geek!). I wanted to know how we could prepare for climate change and how we could mitigate it.

Farmers are enthusiastic about faming and being part of the solution. They do a great job of feeding the planet—but wouldn’t it be nice if they could help save it, too? The thing is, when they hear talk about climate change and mitigation strategies, they immediately think of implications for their business, such as a heavier tax burden. So if you ask them if they believe in climate change, they might say ‘No,’ not because they’re climate-change deniers but because they’re more afraid of the proposed solutions than of the problem.”

What came out of that work?

“We found that tillage and fertilizers were sources of GHGs that could be mitigated. No-till agriculture and cover crops are great examples of how to reduce emissions and the need for fertilizers, build carbon in the soil and preserve the topsoil at the same time. We had a model that predicted that you could get to carbon-neutral from a cropping standpoint. So if you did it right, you could offset all your emissions from use of fuel and fertilizer by building the carbon back into the soil. Sequestration and storage in the soil are a great counterbalance to activities on the land.”

“Well, it could be used in different climates but it’s easier in temperate zones. In tropical climates, it’s so much harder to build carbon because it breaks down under lots of rain, heat and sun. Plus, weeds grow faster and herbicides are less available, so more tillage is needed. That said, rainforests do a great job of storing carbon but in the canopy, not necessarily in the soil. In the Northern Hemisphere, we can do a lot more in terms of reducing emissions in agriculture.”

What did you learn from talking to consumers?

“At Monsanto, we were acutely aware of criticisms and what we could have done to right the story. Unfortunately, we can’t turn the clock back, and it’s hard to counter some of the bad press.

There are plenty of lessons we can learn from the past. We know that food is an emotional issue, and when a topic is emotional, scientific arguments don’t hold much sway. We also know that trust is paramount. How do you establish and keep trust with consumers? The number one factor associated with trust is transparency.”

How do you build trust?

“As scientists, we tend to understate the risks and overstate the benefits because we like shiny new technologies. So two things can help clarify the situation: 1) Transparency about risk versus reward and 2) Good story tellers who can effectively speak to a broad audience about the issues. What we don’t want is a situation where consumers want more information, but all they see are images of buildings, machinery and technology. The best story-tellers are farmers and producers because they’re doing the job every day. They are the genuine voice.

Some consumers are critical of agribusiness. They believe the only thing industry is interested in is making money. Of course, in the short term, that’s correct. But industry wants to make money in the long term as well. So agribusiness is constantly evaluating risks and liabilities, but shouldn’t expect to fly under the radar when it comes to new technology. We have to get out there, and talk about what we’re doing. The science can’t be left to speak for itself when emotion is at play.”

What role has the internet played in all this?

“Consumers used to get their information from credible sources like journalists, the news, experts or scientific journals. But now, everybody is an expert and can easily publish information. That doesn’t mean the information is vetted. Activists have found an effective tool in social media, and they tend to use the spaghetti principle (fling a credible-sounding meme against a wall and see if it sticks) to find out if an issue has legs.

An example is the story that circulated claiming GMO crops caused farmers to commit suicide. We thought that was ludicrous, but it stuck because farming in India has long had a problem with suicides that were often tied to bankruptcies. Yes, some farmers had invested in GMO seed, but without the financial safety net of crop insurance like in North American and Europe, they went bankrupt if crops failed. We even found that, often, the purported GMO seeds were counterfeit. It took so much effort to disprove that story, and it still lingers today like an urban myth.”

Stay tuned for Part 2 in next month’s newsletter!

Many attendees expressed how enjoyable their Tour experience was, from the information sessions held on the way to the tours, the lunchtime talk by UC Davis’ Charlie Brummer, to the student posters in the pavilion. 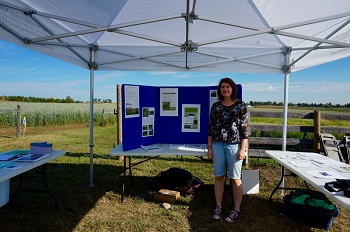 The day was meant to educate, and that goal was achieved. Attendees ranged from producers, academics, and students, to individuals from government and non-profit organizations as well as agriculture-related exhibitors. Everybody had the opportunity to learn about methane gas emissions, overwintering, cow-calf productions, and the pivotal role genetic information plays in agricultural operations.

At the pavilion, John Basarab (see below) from Agriculture and Agri-Food Canada discussed the development and application of EnVigour HX™, an Alberta-developed genetic analysis that gives producers pertinent information on their cross-bred herds, which then allows them to make more informed choices to gain a more economically efficient herd. 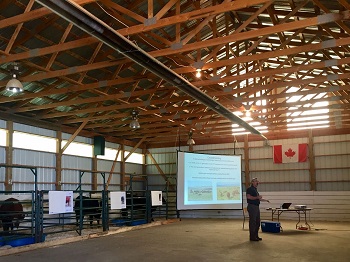 The Legume Tour was organized by the Grey Wooded Forage Association. The multi-site tour aimed to educate producers and researchers on the interaction between forage pasture and cattle grazing. The theme of the first stop was the growth response of different cultivars of alfalfa for wintering and grazing. Dr. Vern Baron and Darren Bruhjell demonstrated the winter hardiness and regrowth of each alfalfa cultivar, and explained that each trait is usually exclusive of the other.

Next, Dr. Charlie Brunner (see below) presented on breeding for reduced dormancy while maintaining winter hardiness in alfalfa in the hope of developing an alfalfa crop that is resilient to cold and shorter day-lengths but that can attain high regrowth after grazing. Selection methods involved growing alfalfa in cold stress and selectively breeding for those that survive. Since alfalfa cultivars are made up of genetically variable individuals, exerting a stress will select for individuals with higher tolerance to that particular stress. 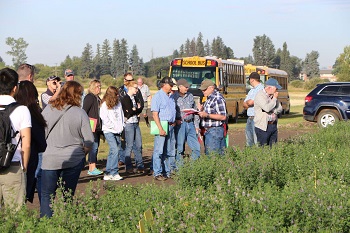 The second and third stops demonstrated the establishment and management of forage pasture in relations to cattle grazing. Murray Abel showcased his pasture, and pointed out that cattle prefer broad-leaved forage like dandelion and orchard grass over woodier Brome grasses. However, a mixture of grass pasture and legumes helps to maintain healthy rumen microbial populations in cattle which increase average daily gain. He also demonstrated that the mixture of sainfoin in grass pastures outperforms alfalfa mixture in grass pastures in all key nutritional parameters, and does not cause the same level of bloat that alfalfa does.

The tour also stopped at pasture sites that have been grazed in the last few months to examine their state of regrowth. An established, efficient pasture should not require any replanting or reseeding because cattle grazing helps with seed dispersal and fertilization of that land.

Charlie Brummer’s presentation was a highlight of the day. His talk focused on work being done with forages, alfalfa in particular, using breeding and genomics to improve forage varieties and production. To drive the message home, he highlighted the dramatic difference in the tonnes of forage produced per hectare, and how dramatically that production falls as one moves North, even within the United States. This obviously has an impact on the degree of supplemental feeding producers do, on the stocking rate a particular pasture can tolerate, and ultimately on the cost of production.

Traditional breeding programs have tried to balance winter hardiness and grazing tolerance while shortening the dormancy period and maintaining or increasing the yield according to the temperature and sunlight patterns of a given geography.

Newer methods using genomic SNP technology (the same technology used to determine parentage and to select for specific traits in cattle and other livestock species) is helping to select for forages with a lower likelihood of winter injury and shorter-than-expected dormancy periods that, when combined, result in greater annual forage production. And just as in animal production, the phenotypic information is critical in building the database of what a genetic variation implies for the next generations.

Charlie concluded that breeding and genomics provide a valuable tool in increasing yields, and that the ability to affect the dormancy period (particularly at higher latitudes) can improve late-season yields. The ultimate strategy may be to combine winter and grazing varieties to optimize the benefits seen in high-yielding pastures.

The implication for ranchers is clear. BCRC research suggests that every additional day that herds can remain on pasture saves the cow/calf sector $3.6 million.

This session, given by John Basarab, ran several times during the day. For the very last session, both sets of bleachers were filled to overflowing, forcing people to stand around the perimeter of the room.

John’s main theme was on the impact of EnVigour HXTM, a new tool measuring hybrid vigour in cross-bred cattle developed by Alberta Agriculture and Forestry staff at the Lacombe Research Station with Livestock Gentec and project partners. EnVigour HXTM gives commercial producers three pieces of information: parentage, breed composition, and a vigour score. From this, they can assign parentage back to the sire, enabling them to determine which bulls are performing well (lots of healthy calves), poorly (difficult births or those with poor conformity) or not at all. Similarly, with information on breed composition, they are better able to match their herds in terms of balancing or employing breed differences based on how they want their herds to preform across various traits.

The most compelling outcome demonstrated as a result of the research (and of EnVigour HXTM) is that, by increasing the degree of “Vigour” in their herd, producers can significantly increase the longevity of their cross-bred heifers (see figure below). The impact of this, through increased pounds of weaned calves produced and the decrease in retained heifer costs, is estimated to be more than $160 per year per cow, or $80,000 per 100 cows over 5 calvings, when comparing low-vigour and high-vigour herds.