Where once genetic and herd management services to the dairy industry came from separate sources, Lactanet Canada now integrates these services under one organization.

As of June 3, 2019, founding partners of the new Lactanet (Canadian Dairy Network, CanWest DHI and Valacta—the leading dairy herd improvement organizations responsible for genetic evaluations, milk recording and knowledge transfer) can offer access to modern herd management through improved technologies and software and more meaningful data. Not only will these integrated services make life easier for farmers, Lactanet will also offer new services, using the same current resources. These services will be offered before the end of 2020, and include remote electronic collection of on-farm data, a national dairy cattle traceability system and genomic evaluations for feed efficiency,

While the objective in creating the partnership was not to save money (although operational efficiencies are predicted), Lactanet’s Chief Services Officer, Brian Van Doormaal, points out that fees for current services to farmers and the staff delivering them, are not projected to change nor are genetic evaluation services to the industry.

What Lactanet will do is: better position the dairy sector to manage business risk, take advantage of operational synergies and efficiencies, integrate genetics with management services, stimulate innovation of new products and services, and build on the strengths of each partner.

“The sector as a whole will benefit,” says Brian. “We’ll be able to help farmers tackle the challenges of the Canadian dairy industry, which include lower milk prices, increased farm debt load and rising interest rates.”

Lactanet’s governance structure is designed to reflect the three founding organizations, and focus on services to Canadian producers: every member of the Board is a dairy farmer. Three additional important industry partners have a producer appointment to Lactanet: Dairy Farmers of Canada, Semex Alliance and Holstein Canada.

“Holstein represents over 90% of all dairy cows in Canada,” explains Brian. “And Semex is the largest Canadian farmer-owned A.I. company with national reach. Dairy Farmers of Canada is the national body that represents all licensed producers from coast to coast. In this way, the Lactanet Board covers the vast majority of services to farmers. As well, working with a Board of nine producers, with the ability to name two additional external directors, allows us to be more nimble in these early stages and ensure success. The Lactanet governance model is scalable, if needed, as the industry decides how to best meet the needs of dairy farmers and remain globally competitive.”

Gentec’s former Director of Knowledge Translation, Dawn Trautman, spent 12 days in China at the beginning of May, marvelling at its contradictions and potential with her MBA program group.

She walked us through her photo album and shared her insights on this global powerhouse.

Hanergy
Hanergy is one of the largest solar manufacturers in the world, specializing in thin film and thin-film solar cell research. It has R&D centres in Beijing, Sichuan, Silicon Valley of the US, and Uppsala, Sweden. 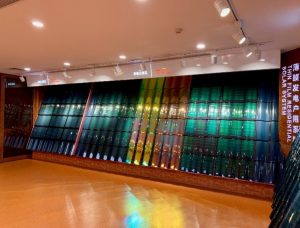 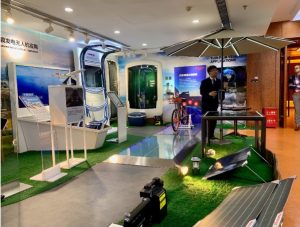 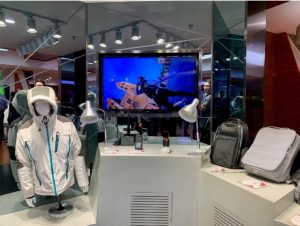 “The technology is getting better,” says Dawn. “Hanergy is proud of the 17-18% efficiency of its solar panel glass windows. The opacity is gone. Now you just see a bit of a wave.”

“The demonstration products in the showrooms got more and more impressive as we progressed. Anything you can think of to put a solar panel on—they’ve done it. Umbrellas… Coffee shop tables… Sidewalks… Drones… Anything. You didn’t know you needed this power until you have it there. The bike has a solar panel in the basket that powers the payment system for a bike-share program. Panels on the back of a jacket power heating elements. It’s all ingenious.” 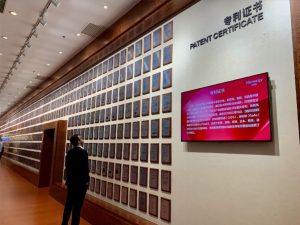 Hanergy has applied for almost 1,000 patents in new energy, of which 60% are invention patents (including core patents from the acquired overseas companies). It has also been the chief developer or involved in the development of over 10 national and industry standards on solar energy. 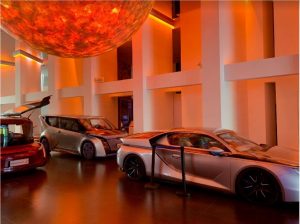 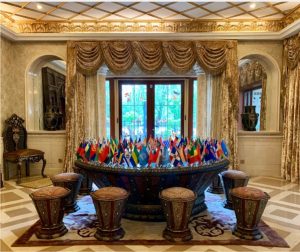 The former home of Dr. Li Ruohong, President of China World Peace Foundation (CWPF) and Beijing International Peace Culture Foundation (BJIPCF) converted into a ‘museum’ and hosting residence for delegations. Dr. Ruohong is involved in the Belt and Road Initiative; an ambitious endeavour for linking China with neighbouring and distant regions, physically and with policy and trade coordination. It will put China at the centre of international trade with the end result to ‘open up the world’ to globalization and international cooperation.

In 2018, Gentec CEO Graham Plastow attended a conference on the Belt and Road Initiative on behalf of UAlberta. Gentec’s linkages with the China Agricultural University, Zheijiang University, Huazhong Agricultural University and others as well as exchanges of personnel have contributed to vibrant relationships for the benefit of science and the two countries. Notably, former Gentec professor Zhiquan Wang is now helping the Guangxi Yangxiang Co Ltd develop its pig genetics program, including using new technologies such as facial recognition.

As well, UAlberta itself has facilitated linkages with China, notably when Dr. Lap-Chee Tsui, President and Vice-chancellor of the University of Hong Kong, visited the University in March 2015 for roundtable event called International Collaborations with Scientists and Educators in China. Another more recent event was the latest Canada China meeting regarding Science, Technology and Innovation (STI) Collaboration Projects through Global Affairs Canada, which may include a project on beef with Gentec.

“What struck me was that there’s not much influence from the Americas,” continues Dawn. “We have this centralized view of North America but on the global scale, it’s a bit worrying that we seem to be an afterthought. We really need to address how Canada can play a bigger role, especially since we’re Pacific neighbours. Our professor said that another possibility of partnerships with China would be to gain access or facilitate partnerships to other countries.”

Panels like this one record the gender and age of shoppers, how many parking spots are free, etc. so shoppers can decide when to go to avoid the crowds. It also directs heating and cooling from the recorded hotspots.

“This was a bit spooky,” says Dawn. “We couldn’t figure out how they know the age and gender! Maybe through the messaging-social media-mobile payment app, WeChat. And there are cameras everywhere, so as a tourist you feel really safe.”

Shanghai Zhangjiang HiTech Park
This park acts as an incubator for tech companies as well as an accelerator and free-trade zone. Companies there make a video game for hand-and-arm rehab that is being sold in Germany, and other health-related products. 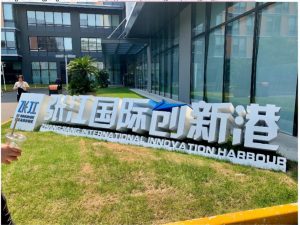 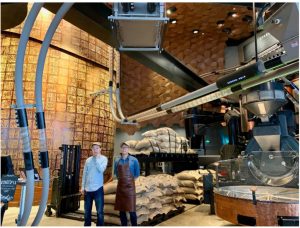 At 30,000 square feet, this was the largest in the world until a one opened in Tokyo. At $6-7/mug, Starbucks is expensive in China, more of a status symbol. 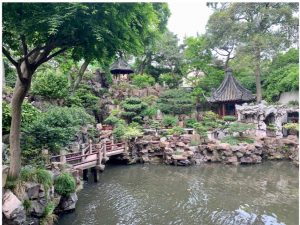 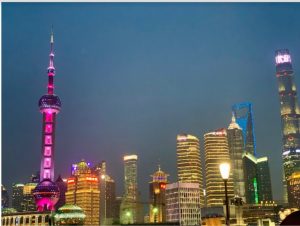 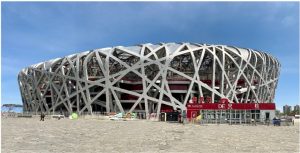 “You see what I mean about contradictions?” asks Dawn, speaking of these images. “Shanghai is like any international city. There’s even a French concession area. It didn’t always feel like China, whereas Beijing and the other cities did. China will host the Winter Olympics in 2022 so I think they will reuse the Bird’s Nest.”

“We should be more aware of their development,” she says. “It felt like the future is here, and we’re playing catch up. Obviously, there are still problems, like pollution, but there are trees and tree farms everywhere so they are concerned with the environment. Is it a distraction? Some of the more interesting things in societies are their contradictions. China is both modern and respectful of its traditions, and it seemed there was often structure and chaos at the same time.”