Recently, (November 2018), the PEW Research Centre produced a report (Public Perspectives on Food Risks), which identified gender differences in public perspectives. We were curious about that aspect of our own research so we went back to a national survey[1] conducted in January 2017 and had a look. In fact, there are statistically significant differences in the public perceptions of a number of food risks in Canada that are very similar to the ones identified by the PEW Research Centre. Here are some examples of different perceived food risks by sex in Canada.

We asked consumers: “How do you rate the health risks for consumers of regular consumption of (1) foods with pesticides or other chemical residues; and (2) Genetically Modified Food? (see headers in the following charts)” 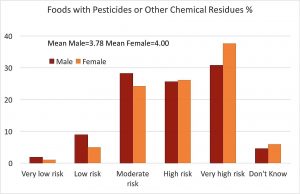 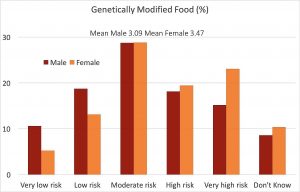 The differences in responses between males and females is statistically different in each case. This is particularly interesting given that females still do predominantly more household food shopping than males.

The PEW research showed that people who were more knowledgeable about science were less likely to oppose GM foods. That, too, was something we investigated in our 2017 national survey of 1,800 Canadians. In that survey, we asked people to self-assess their knowledge of science and technology on a scale from 1 (know very little) to 10 (know a lot). The frequency of responses at each level of the scale and the average perceived human-health risk of GM foods for each group of respondents are shown in the following figure. There is a clear negative relationship between self-assessed science and technology knowledge and perceived risk of GM foods. 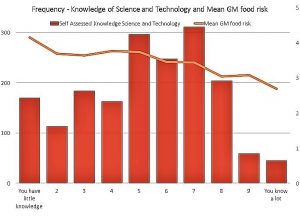 Given that the second rationale for concern about GM foods often concerns unexpected environmental externalities, we also looked at self-assessed knowledge of environmental problems (again, on a 1 to 10 scale) and perceived GM-food risks by groups. 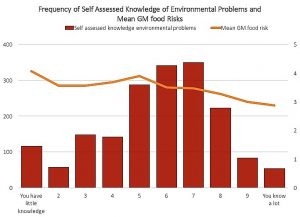 A number of other studies have suggested that there might be issues of fairness in markets and sectors that influence people’s assessments of the risks of GM foods (see here and here). In our research, we assessed a number of different aspects of fairness including the fairness of producer and consumer prices. To illustrate the concept of fairness and perceptions of GM food risks to human health, below are the answers to: ‘When it comes to new technologies in agriculture, it is fair to spend my tax dollars on developing these technologies. ’ We used a scale of 1 (strongly disagree) to 5 (strongly agree). 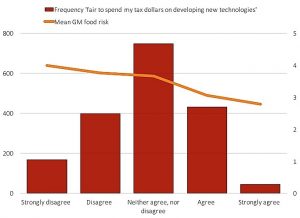 Again, there is a clear downward trend in the perception of GM food risks to human health with stronger agreement that taxes should be spent on the development of these new technologies in agriculture.

Interest in science and technology is likely developed at an early age and, without that interest and follow-up throughout their lives, results suggest that people are more likely to oppose the use of genetic technologies in the food space (although they likely all own and use smart phones). Food is different, and raises a host of different concerns than do some other technologies in our daily lives. As demonstrated in another of our studies, cultivating an interest in science and technology across the population may reduce the perceptions of the human-health risks of GM foods (and likely of the outcomes of other genetic technology approaches).

[1] This survey was conducted in order to better understand the public’s interests in science, technology and animal agriculture as well as willingness to purchase different meat products.