Any well-motivated student with a good attitude can have a career in agriculture if they want it. So why do so many positions go unfilled?

“Mostly because there’s a disconnect,” says Frank Robinson, Professor of Poultry Production and Physiology at UAlberta. “Most animal science and animal health students are urban. Most of them don’t have a way to start getting experience with large animals so they can go on to get more experience. We have to break this cycle!”

So that’s exactly what he’s doing.

As of spring 2020, 364 students have participated in a three-day mini internship on poultry, dairy, pork, beef, equine and other farms during the fall and spring reading weeks. (The unusual notion was that “reading” week should actually have an academic component, not just be about skiing or beaches.) The last cohort comprised 118 students. Pretty good for a program that started only four years ago with 16 students.

And it’s low input, too. Students in the faculty of ALES can apply for $50, a statement of interest and an intake interview. Robinson trawls his network of producers, companies and sector associations. The faculty provides a travel/lodging allowance, if appropriate, and boots and coveralls that the students return at the end of their internship. (Robinson says his office smells like Canadian Tire.) And the hosts set up hands-on training that can range from calving, vaccinating chickens and often, plenty of mucking out (poop!). 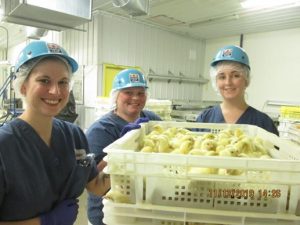 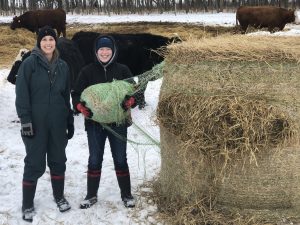 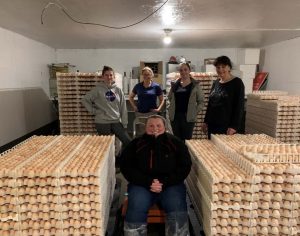 The feedback is pretty positive. An overwhelming majority of the students report that they clarified and tested their career interests and felt more confident about their job prospects thanks to their new connections, and they learned how to apply their training/education in the real world. In fact, two students have done five (!!) internships, and over half the applicants are on their second one or more. The hosts also report enjoying the experience, wishing they had had similar support early in their careers.

Hosts also reported feeling more connected to the students. This is important since Robinson says that the most noticeable skill industry wants in a new recruit is communications: someone who can hold a conversation, not zone out on their phone the moment they have a second of down-time; someone who can be sociable, take direction, be part of a team and have fun doing it. So not necessarily the person who can pull a calf most efficiently, but the one who sees something that needs doing—and does it without being asked.

“Some farmers have hired students for the summer based on their experience with the program,” says Robinson. “That means success.”

Understanding that its recruits are mostly urban, the Faculty of ALES offers other opportunities for students to get their feet wet (literally).

AN SC101 – Principles of Animal Agriculture

Robinson has been teaching or co-teaching this course for over 40 terms. It’s an introduction to the structure of the livestock, poultry, and game ranching industries that covers the principles of animal management, breeding, feeding and current issues in animal agriculture.

“It’s the first farm-animal class, so we try to get their hands and feet dirty,” he says.

The students tour beef, poultry and dairy operations. They also do a project that involves farmers/farming, which could be as creative as building their own virtual farm with a $10 million start-up budget. At the end of the course, they pitch their farm, 3D models and budgets at a big evening event in an auditorium in front of a panel of judges. In a previous event, a real auctioneer sold the farms at the end of the evening, one of which went for $40 million. A tidy profit.

Back in 2018, Gentec CEO Graham Plastow volunteered as a panel member. “The enthusiasm of the students is infectious, and the judges have been known to get quite competitive about bidding for their favourites. That spilled over to the real fundraising auction where I bid on one of the Heritage chickens, which turned out be be money well spent as my hen was a very good layer.” (Sponsors can pick up eggs on a regular basis but they’re not necessarily from the spondored hen.)

While the 101 course and the internship give students a pretty good view of the producers’ perspective, if they’re going to study farm animals in a research environment, they need a different approach. UAlberta follows CCAC guidelines to deliver a three-hour session covering dairy cattle, swine and poultry (one session per species), taught by Robinson and other faculty and staff. On completion, the students are certified in handling that species, and can work with it in research. In the last two years, 240 students have been certified.

“City kids who haven’t been on a farm aren’t ‘fluent’ in agriculture or its techniques,” says Robinson. “Unless you grew up with mud on your boots, you don’t know how to halter a calf, move a pig or pick up a chicken. Students need these practical skills to get hired.”