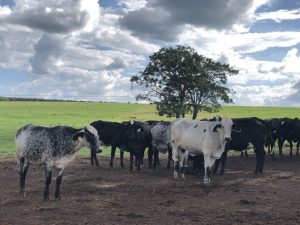 “These are Girolandos,” says Valente. “They’re a cross between Holsteins and Gyr, more adapted to hot climates and ectoparasites. The down side is that they produce less and are more… uhm… reactive during handling than the European breeds.”

Valente’s main interest is the genetic approach to behaviour in farm animals, focusing on temperament in cattle. In Brazil, one of the projects he is involved in relates to milking temperament in Girolando and associating the trait with production and health and welfare aspects. These pictures were taken at one of the farms involved in the project, the Fazenda Floresta in Sao Paolo State, which has a large herd of Gyr and Girolando. Valente’s visit had one key objective: training the heifers.

“First milking is a big problem. Sometimes they go absolutely crazy, break everything and hurt themselves,” he admits. “So we try to get the heifers used to the parlour facilities ahead of time.”

The idea is to reduce their reaction (their flight zone) and teach them about their new lives. Brave volunteers guide them into the parlour without restraints, walk around them, introduce them to new noises and new equipment. The pictures below show the “novel object test” to assess the Girolandos’ general fear of novelty. 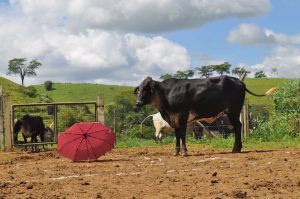 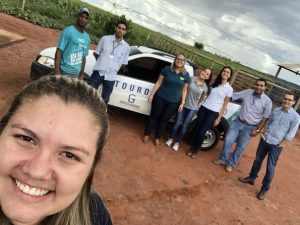 “In this picture,” says Valente, “a group of us from Sao Paulo State University are at Girolando Bulls’ Performance Centre in Uberaba, State of Minas Gerais, measuring the bulls for temperament.”

Due to the cost of collecting semen from Girolando bulls (and, no doubt, the danger to life and limb!), a preselection test is done instead. Since 2014, bulls are measured once a month for four months for temperament, which comprises 10 percent of the selection index. The other factors are andrological parameters and body capacity measurements.

In Canada, nothing nearly so adrenalin-pumping. As a postdoc, Valente works with Gentec CEO Graham Plastow and Gentec-associated researchers John Basarab (Alberta Agriculture and Forestry), and John Crowley (Canadian Beef Breeds Council) on feed efficiency as it relates to feeding behaviour in beef cattle.

“We know some animals spend more time at the feed bunk but are not more efficient than those animals that spend less time” he says. “So we’re looking at two traits: one for time at the bunk (duration) and the other for ‘head down’. The second one means they are eating not just hanging around.”

Valente found Graham Plastow and Gentec through another Canadian. Karen Schwartzkopf-Genswein (Agriculture and Agri-Food Canada, Lethbridge R&D Centre) is a visiting professor at Sao Paolo State University, where Valente was doing his PhD under Mateus José R. Paranhos da Costa (Faculty of Agricultural and Veterinary Sciences). There, the two developed a close professional relationship and co-authored a publication. When he was searching for an internship for his PhD, he asked her where he might study genomic tools applied to beef cattle in Canada. She recommended Gentec.

“Graham is an excellent connection,” he says. “He helped improve the quality of my PhD thesis, invited me for the postdoc, and now I have an opportunity to build a bridge between two like-minded organizations.”

Indeed, Plastow is keen to collaborate with the Empresa Brasileira de Pesquisa Agropecuária (Embrapa), the Brazilian agricultural research corporation, which has precious datasets from breed associations and phenotypes that could be useful in the Canadian context.

“Travelling between Canada and Brazil, especially to work on different projects… it’s quite gratifying,” concludes Valente.