Robert Mukiibi is finishing up his PhD in bovine quantitative and functional genomics related to feed efficiency. He’s been with Gentec for nearly four years. During that time, he has focused on improving feed efficiency in beef cattle through the genetic selection of more efficient animals using high throughput genomic tools. His research aims to identify genes and gene variants associated with feed efficiency through sequence transcriptomic data analyses of coding and non-coding species of RNA. The information obtained is then used to improve genomic merit estimation for breeding animals. Robert is also involved in imputation of genotypes from low density panels to high density and full sequence genotypes, and genomic prediction for feed efficiency traits in beef cattle.

This is where the Irish angle comes in. Canada and Ireland have common research interests in beef cattle genomics. In 2014, Robert’s supervisor Dr. Changxi Li at Gentec, UAlberta and Dr. Sinead Waters at Teagasc (the Agriculture and Food Development Authority, Ireland) were awarded a Teagasc-UAlberta Walsh Fellowship to work on the project: “DNA-based biomarkers for feed efficiency in beef cattle,” which helped support Robert’s own project: “Quantitative and molecular genetics of feed efficiency traits in Irish and Canadian beef cattle.” 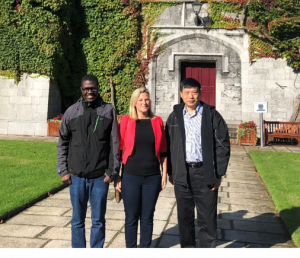 Robert has visited Ireland twice for his project, first in 2016 and again in 2018 with Dr. Li to enhance the joint research activities. During the 2018 visit, the pair presented at the National University of Ireland, Galway, and at Grange(see below). Robert’s Irish co-supervisor, Dr. Waters, is expected to visit Canada as part of the exchange.In 2017, Gentec hosted Teagasc’s Tara Carthy, who was working with Gentec’s Dr. Paul Stothard to identify structural variants in the bovine genome associated with important economic traits.

“Ireland really is as green as they say,” he winces. “It rains several times every day. It’s vital to carry an umbrella but it’s not always useful because of the strong winds.”

Similar to Gentec, the lab experience was all Robert could hope for. Cooperative and collaborative colleagues, unlimited access to lab tools and everything he might need to obtain reliable and reproducible results for the scientific community and industry. While there, Robert expanded on his social experience with visits to the pubs to see live bands, and watching Gaelic football. Such was the warm and welcoming working environment, that fellow students picked Robert up from his lodgings and brought him back—for which he was extremely grateful.

“The bus rarely runs on time and the frequency is very low,” he remembers. “So when it breaks down, I had to wait an hour for the next one.”

In terms of key points that might help other students decide where to study, Robert believes that Canada is a bit more student-friendly than Europe in terms of easily accessible healthcare, availability of student partner employment permits, availability of extra merit-based scholarships and affordable and efficient transportation through student passes. A major difference he highlights is the high cost of student accommodation in Canada compared to Europe.

Robert thanks Dr. Li and Dr. Waters, Teagasc, Alberta Innovates and the Department of Agricultural, Food & Nutritional Science at UAlberta for the wonderful opportunity of the Walsh Fellowship. He is already looking for a postdoc position for the fall.

“I’ve now lived out of my home country, Uganda, for more than 10 years in countries including Egypt for my undergrad, Sweden and the Netherlands for my MSc and now Canada for my PhD. So the next stop can be anywhere in the world. I’m open to suggestions.”