On August 11, 2022, Genome Canada hosted a webinar on the benefits genome editing can bring to agriculture, which Gentec researcher Niloofar Pejman summarizes for us here. The webinar is a nice add-on to our gene-editing series, which you can catch up on here, here, here, and here.

By 2050, the global population will reach nearly 10 billion people and in order to feed them, we need to double food production, but how?

Dr. Singh explained that before talking about technologies and ideas, we have to think about what crops or plants are needed to feed the world. Many kinds of cereal are very important for food security because the majority of calories come directly or indirectly from animals.

So if we want to double or triple the yield of cereals…is it possible? It would be a big challenge, especially in the face of significant yield declines (20-30%) in cereals due to climate changes via abiotic (heat, drought, salinity) and biotic stresses. Dr. Singh’s research focuses on the genetic dissection of important traits. Originally, he started with transposon mutagenesis and gene editing (GE) in small grain cereals for decoding and tuning genes.

He continued that GE is an amazing tool. It is revolutionizing agriculture, and will be very useful. He mainly uses CRISPR-Cas9, although many GE tools are available.

What is GE? Our crops were domesticated thousands of years ago. Since the last 100 years, our breeding techniques have not changed, so basically, it takes 20 years to have a new variety.

In the meantime, new tools are available such as speed breeding that allows us to cut maybe ten years. And we have a revolutionary technique, CRISPR-Cas9, with which we can develop new varieties in four or five years. Note that GE is a targeted alteration of DNA sequences, and does not bring new DNA from other species. He believes that the CRISPR-Cas9 system demonstrates great potential for developing generation cereal cultivars and regulating beta-glucan in oats.

Why oats? Oat is an important crop with multiple uses: grain, forage, fodder, silage and, most importantly, it has soluble dietary fibre (β glucan), which can reduce serum cholesterols and high blood glucose. So one potential application of CRISPR-Cas 9 is to enhance the nutritional value of oats to meet the growing food demand for β-glucan and improve abiotic stress tolerance in response to global warming, drought, salinity, etc.

Dr. van Eenennaam explained that many objectives visualized in plants are the same for animal breeders as well. She talked about livestock breeding, and conventional breeding acts on alterations of the genome brought through natural selection or artificial selection to give us obviously distinct breeds and behaviours and appearances. The huge discussion point is around sustainability. If we look at the alterations made between 1957 chickens and 2005 chickens using conventional breeding, we can see incredible changes in the rate of growth and food conversion. A similar change took place in the dairy industry since the introduction of artificial insemination in 1940 when we had a four-fold increase in overall production per cow. 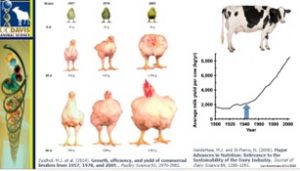 The goal of animal breeding is to introduce useful genetic variation into the germline of selected parents such that genetic improvement is inherited by the next generation. There are a couple of ways of doing this. Dr. van Eenennaam explained about injecting the CRISPR-Cas9 into the one-cell bovine zygotes. The interesting thing is that both alleles (mom and dad) can be edited and produce non-mosaic homozygous animals that have alterations in both copies of the genome.

What might we knock out? Genes associated with disease susceptibility, allergens, unwanted development, thermo tolerance, etc.

She showed examples of different traits in different groups; for example, GE to produce porcine reproductive and respiratory syndrome virus-resistant pigs. These pigs are the first GE product taken through the regulatory pathway in the US for animals. Another example was GE to knock out a gene associated with sexual maturity in male pigs. In North America, male pigs are castrated to prevent boar taint, and that is an animal welfare concern. GE can control the sexual development hormones.

We are still probably going to target improving food quality nutrition and disease, such as gene knocking of NRAMPusing CRISPR-Cas9 to create animals that are resistant to tuberculosis. Also, groups are working to produce pigs resistant to African swine fever.

Dr. van Eenennaam also talked about global GE regulations. The table shows that countries around the world have different kinds of regulations about GE in food and crops and gene editing in food and animals. 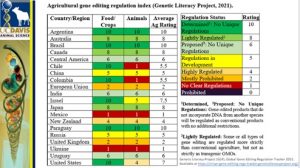 According to the table, for instance, Argentina, Australia, Japan and Brazil have already determined how they will regulate GE crops and livestock, allowing some GE products to pass regulation faster.

Canadian regulators have a unique stance toward products containing novel traits, such as GE animals, regardless of the process used to develop the product. So, new traits in foods require environmental and safety approval before being sold.

In summary, new breeding technologies, including CRISPR-Cas9, have enabled new opportunities to be explored in the breeding of plants and animals. In addition to enhancing our food supply, GE can improve animal welfare. Since GE does not involve introducing DNA from another species, many scientists believe it is less risky. However, in many countries, GE products are regulated differently, and the use of gene technologies remains controversial.